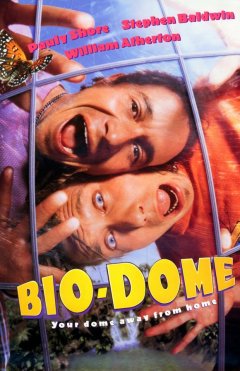 I heard the bubble diagnosis again the other day. A friend told me they needed more time outside the “Circle bubble.” I did not pursue the thought too much so I am still wondering, “Did they feel like Pauly Shore in Biodome?“ They seemed to be taking an anthropologist’s view of the church and decided they needed some breathing room from the subject tribe.

Whether they were just inspecting us or not, I think they mostly make sense. If your congregation becomes a bubble and you are relationally stuck in it, something needs to change. Worse, if the rules of your religious social system are strangling your relationships with people outside of it, that could be toxic to you and to it. It could be “koinonitis.”

The leading cause of death among organic, relationship-based churches is koinonitis. The word is a spin-off from the Greek word koinonia, which means “fellowship,” or life in common. Fortunately, koinonitis has become a popular topic among us for the last few months. If we don’t see it lurking around every bush, it should do us some good to think about it.

Luke reports that the first church, “Continued steadfastly in the apostles’ doctrine and fellowship [koinonia], in the breaking of bread, and in prayers” (Acts 2:42, NKJV). Koinonia is the corporate experience of God in the midst of the body of Christ. It’s the common sharing of the Lord’s life, the shared life of the Spirit.

The Holy Spirit is primarily a shared experience. We often think of the Holy Spirit as someone we encounter as an individual (perhaps in our beloved contemplative prayer). But in the New Testament, the outpouring of the Holy Spirit is almost always given in the context of a shared-life community where other believers are actively involved. There are, for sure, individual spiritual experiences. But the highest spiritual encounters are those that we receive with and in the Body of Christ. This is the meaning of koinonia.

Circle of Hope is blessed with deep understanding of the rare experience of koinonia. You could see it at our Love Feast last Saturday and hear about it in so many of the stories new covenant members told about why they want to take what has become the strange step of making a covenant.

Koinonia, however, can devolve into something quite pathological and poisonous. It can develop the disease: koinonitis. Koinonitis sets in when koinonia is ruled by the group’s processes rather than by Jesus. When the processes strangle the presence of Jesus the church dies.

In some places devolution happens when the community emphasizes being a community so much that the church turns insular, ingrown, and self-absorbed. For them, koinonitis is too much of a good thing. It is “fellowship inflammation.” Like high blood pressure, koinonitis is a symptomless disease. The church is typically unaware of it until it suffers a stroke.

In other places (and I think among Circle of Hope) koinonitis can set in when the family system develops unhealthy patterns of relating. For instance, among us, there are people who protect others from relational or spiritual pain and impose a “niceness” or tolerance that keeps anyone from saying, “The Emperor has no clothes.” Jesus does not rule, the rule that you are not supposed to say anything that could spoil our sense that “everything is copacetic” or maybe “everything is awesome” rules. Koinonitis can set in when there is no reconciliation needed because people who cause “problems” are the ones who need to reconcile. They are bad because they violated the appearance of koinonia.

Like high blood pressure and dysfunctional family rules, koinonitis is hard to spot by the person experiencing it, but it is easy for outsiders to see. Here are some characteristics of this disease:

How to be healed if the diagnosis fits

I don’t think we, generally, fall into most of these descriptions. But what should we watch out for? As an organic, communal people, we are prone to the disease. (And at least one person feels like they need to get out of the “Circle bubble.”). So try these things:

We’re an organism of diverse parts enlivened by the Spirit. We are a work of God in progress. Like all organisms we can get a disease and die; we can wander into an environment that starves us and could kill us. We need to keep listening and obeying as God keeps us safe, renewed and useful in the cause of redemption.

1 thought on “Koinonitis and the bubble diagnosis”