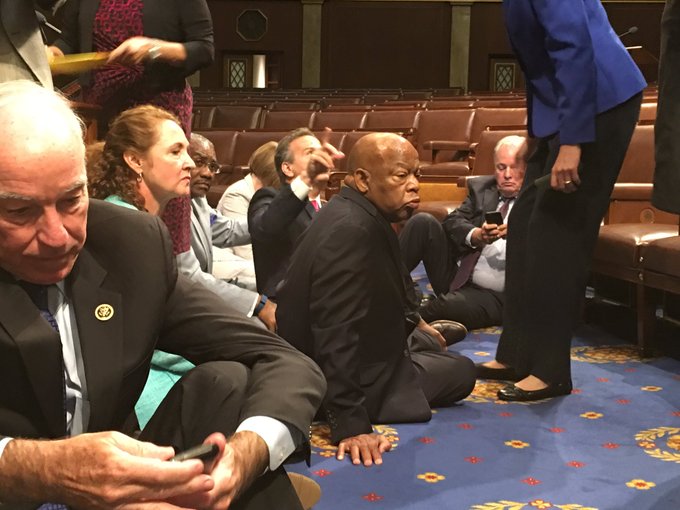 In 2016, John Lewis led a sit-in on the Senate floor to demand common-sense gun-control. He did not get what he wanted, but he never gave up. And he never gave up his remarkable love as he did it.

I watched almost all of his funeral last Thursday. I was repeatedly moved by the saint being honored in Martin Luther King’s church.

I even praised George Bush

I was flabbergasted by George Bush’s tender speech. In the spirit of John Lewis’ “love first and let the rest follow” Christianity I ventured a rare Facebook entry to be amazed about Bush. I just felt like saying something not-quite-nice-but-good about a man about whom, Lord knows, I have said about a million extremely negative things.  I was taken up by the way of love.

I am not sure how people found this FB entry, since they did not comment on my next entry about St. Ignatius (who has plenty to criticize, as well). But they countered my little love with quite a bit of hate for Bush. In their defense, the bombers who flew over my Facebook page were probably just standing up for what they believe in. I think they were trying to make sure George Bush was not exonerated by being likable, which is his go-to. I did question their love, but they also reflect my hero in their stubborn refusal to give in to the lies that are destroying the beloved community. I’m not sure they are building such a community with their judgment, but at least they are on some frontier shooting at its enemies.

The better way of John Lewis

John Lewis had a better way and it made me cry to hear about it, even from George Bush. Lewis let his little light shine right to the end. When he knew he was dying, he asked the NYTimes to print his final words, and they did. Obama essentially riffed on Lewis’ exhortation in his eulogy. Here’s part of his parting words:

I heard the voice of Dr. Martin Luther King Jr. on an old radio. He was talking about the philosophy and discipline of nonviolence. He said we are all complicit when we tolerate injustice. He said it is not enough to say it will get better by and by. He said each of us has a moral obligation to stand up, speak up and speak out. When you see something that is not right, you must say something. You must do something. Democracy is not a state. It is an act, and each generation must do its part to help build what we called the Beloved Community, a nation and world society at peace with itself

I have no faith in the American state. And I think democracy based on capitalism is absurd. But I do know what Lewis is saying when he says “beloved community.” And the fact that he wouldn’t give up until the godless American government reflected it is beautiful. I have given myself to a much smaller goal: that the church of Jesus Christ would be a beloved community that contrasts with the world as it demonstrates the heart of its alternativity. One would think I have a much easier row to hoe than Lewis was given. Some days Facebook mocks me for my hope, but I don’t think we should give up. Lewis didn’t:

In my life I have done all I can to demonstrate that the way of peace, the way of love and nonviolence is the more excellent way. Now it is your turn to let freedom ring.

When historians pick up their pens to write the story of the 21st century, let them say that it was your generation who laid down the heavy burdens of hate at last and that peace finally triumphed over violence, aggression and war. So I say to you, walk with the wind, brothers and sisters, and let the spirit of peace and the power of everlasting love be your guide.

I wish he would  have mentioned Jesus in there. But MLK and his crew did not want to leave anyone out — and everyone is made in the image of God, after all. Their relentless love and their nonviolent pressure had core values that everyone could understand, whether they were committed to Jesus or not. I think it is clear that their values require resurrection power to implement and sustain, since John Lewis died in the same year as George Floyd. But ascending into generous inclusion is a lot better than the usual descent into our present hate-filled particularity.

Thank you Jesus for John Lewis and thank you John Lewis for being Jesus among us. I hope people listen to you even more, now that you have received a lot of media attention. The church should lead the way to truth and justice as it lets love guide it. In  Across That Bridge: A Vision for Change and the Future of America, Lewis said:

“It was no accident that the movement was led primarily by ministers—not politicians, presidents or even community activists—but ministers first, who believed they were called to the work of civil rights as an expression of their faith.”…“Religious faith is a powerful connecting force for any group of people who are working toward social change.”

I am grateful for his example. Love is the way. As he demonstrated, it didn’t even matter if the society changed, since it did, but it also didn’t. Self-giving love will always be the core value of the way of Jesus no matter what we face next, right up to the end.